The Mont Blanc massif, where acid soil dominates and which has steeps slopes made smooth by glaciers, is a rather poor area in terms of flora. The surroundings are richer and more interesting because often the soil is created by calcschist or calcareous rocks and the living conditions for plants, even though characteristic for a rigorous mountain environment, are less extreme.

Even if in a different measure, the contrast in the types of soil having different origins is visible on all faces. In the majority of cases, the species that can be found during an excursion in France are the same as those that can be admired in Switzerland or Italy, with some important exceptions:  the Gentian, for example, present on the Swiss and French sides of the Alps, is not signalled in Valle d'Aosta.

The levels where vegetation in the Mont Blanc Space is most present are:  the subalpine level, where the conifer forest populated above all by spruce and larch prevails; the alpine level, characterised by the meadowland which, going upwards, thins to become pioneer clods; the nival level above the perennial snow.

The subforest of the subalpine level hosts numerous species. Among the most visible are the rare and beautiful Slipper Orchid, the Martagon Lily and the Aquilegia Alpina.

Passing into an area where shrubs such as Rhododendron and Myrtle abound, the subalpine level moves upwards towards the alpine level. The alpine meadowland is populated by many species with spectacular flowering, among which the two vicarious Gentiana acaule and Gentiana Clusii, the famous Edelweiss and the rare Campanulathyrsoides.

Among the rare plants that can be found in the nival level, the two that hold the record for height in the alpine arch are Ranunculus Glacialis and Saxifraga with two flowers.

The three countries have a common legislation that protects species, both flaura and fauna, according to their vulnerability. Mont Blanc Space, together with the work group on sensitive environments, tries to identify local coordinated protection measures for the three sides of the massif.

It is also possible to have an idea of the Mont Blanc Space flora by visiting one of the alpine parks present in the three countries. Even though it cannot replace the emotion of an excursion into nature, visiting an alpine park can be very useful because the plants are classified and therefore easily identifiable. 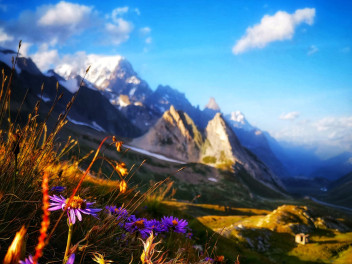 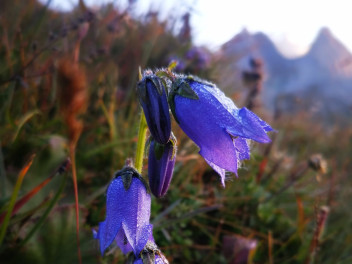 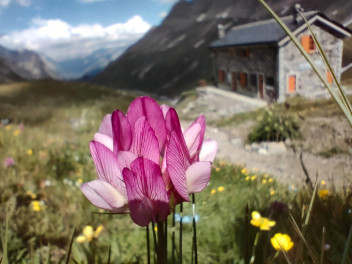 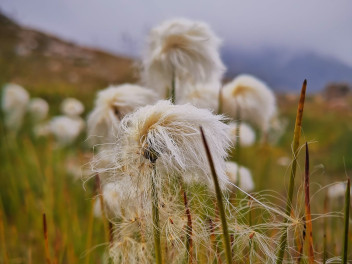 The Mont Blanc Space fauna is varied:  all the main species characteristic of the western side of the Alps are present. This short description will only mention mammals and birds, which in general are more interesting for excursionists.

Just like the flora, even the fauna is roughly distributed according to the levels in altitude, and it displays adaptations to a type of environment or to a specific vegetal covering. In spite of this, some species explore the territory, moving into different, even distant, environments. This is the case of the fox, which can be found in the agglomerates of the valley bottom and also in high altitude meadows, or the Chamois, that frequents both meadows and woods. In spite of this, the animals are mainly tied to a specific habitat, and it is there that we must look for them.

In the subalpine level, in addition to the abovementioned Chamois, there are also two other great herbivores:  the Deer and the Roe deer. In these places the Squirrel, the great red Woodpecker, the green Woodpecker and the black Woodpecker are common.

The area between the high part of the forest and the shrubs that announce the alpine meadowland is inhabited by the mountain Pheasant. During the spring, the males of this species fight for the females with characteristic parades and, at times, true physical contact.

The meadows and the crushed stone of the alpine level are frequented by Rock goats, Golden eagles and the main source of food during the warm season, the Marmot.

Thanks to an international reintroduction project that was started in the 1980s, today it is possible to see the majestic Bearded Vulture flying above the valleys of the Mont Blanc Space, a bird that had disappeared from the alpine arch at the start of the century.

The rigid environments of the altitude level host three species that change colour according to the season: the Mountain hare, the Stoat and the Rock Ptarmigan.

The nival level is too harsh for superior animals:  above all during the summer it is possible to see the Alpine chough and the Tichodroma muraria (Wallcreeper).